A look back at Summerfest 2013

Summerfest 2013 has closed and we're looking back at some of the best of the fest with a two-part photo gallery. Photos by Angela Morgan, Sara Bill, and Madeline Pieschel.

By Angela Morgan - Jul 8th, 2013 12:41 pm
Get a daily rundown of the top stories on Urban Milwaukee
It’s official: The Big Gig has wrapped. In this pair of photo galleries, we’re taking a look back at the last 11 days along the lake in Milwaukee. Over 800 bands performed at Summerfest 2013 across 11 stages and even more musicians strolled the grounds and performed for smaller crowds in between stages. The TCD photo team spend some quality time at the Maier Festival Grounds and has two photo galleries to help you re-live your festival experience. ‘Til next year, smile on, Milwaukee.

Did you catch our daily recap of the festival? Read up on TCD’s concert reviews from the fest here. 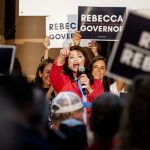 More Than 142,000 People Receive First Dose Between August 20 and September 19 by Wisconsin Department of Health Services

Transportation: Plan Offers Alternative To Expanded I-94 by Jeramey Jannene

Transportation: Railroad Merger is a Win for Milwaukee, Southeastern Wisconsin by Jeramey Jannene